The campaign’s main objective was to generate awareness for Ursus Wild Wild West NCP and to further drive campaign appeal and participation. In numbers, we set out to: - Reach 600 000 people on FB - considering that the promo prizes accounted for 60000 T-shirts, we estimated that by reaching 600 000 people, at least 1 out of 10 would consider entering the promo - Score 260 000 views/video – matching the average number of views for a non-branded video of Sector 7 in 2015 - Engagement: achieve at least 50% average viewed – considering that URSUS benchmark was of 20% for paid videos. And at least 40.000 interactions for the video content created (the number of total interactions on the URSUS FB page for all the content posted in the month before our campaign) Ursus core target is represented by men between 18-35 y.o., with high education & income, at the age of transition to full maturity, yet still seeing themselves as young & free when they go out. Their core need is to escape from the responsabilties by connecting with their group of friends, because when they get together, it feels like they are stronger, better, funnier. They also place great value on their status and how they are perceived in their group of friends, so they seek to be in trend, spend time online looking for info, entertainment or interact via social media. Digital is part of their everyday life. Since URSUS core target is very digital savvy and interested in everything that is new, but in the same time very selective when it comes to online content, we needed to catch their attention via an unconventional idea in order to reach our objective. The solution was to mix some characters that would generate appealing online content with a new technology that would be interesting for our target. This is how we created the first 360 mini-series in Romania (available both on mobile & desktop), inspired by the atmosphere in Wild West, where users could share a ‘virtual’ beer with a gang of famous stand-up comedians, very relevant for our target.


We already knew that Millennials are engaged by video content, but we also needed an endorsement that would transfer appeal onto towards the NCP. While Vloggers would seem like the obvious choice, our research confirmed that (v)bloggers would not be a relevant choice for our 18-35 y.o. core-target, as they appeal to a much younger audience of 12-18 y.o. But as we were digging deeper into pop-culture, we found stand-up comedy to be a local rising trend relevant for our target. More sarcastic, cutting, unexpected, credible, and – most importantly – stand-up comedy was not a common way to communicate locally brand campaigns. So we decided to team up with SECTOR 7, a band of popular stand-up comedians who were killing it online with their weekly YouTube show. Since it was precisely their raw material & unique flavour we were after, they were given full liberty to write their dialogue and act it out. The 3 episodes showed them sitting at a table, enjoying Ursus and telling their incredible stories of how they got their Ursus T-shirts (the prizes of our NCP). Each episode had to be delivered in only one take, like a theatre play, so the camera could capture everything that was going on around the characters and that users would have the full 360 immersive experience. Users could interact with all the elements, explore the Saloon background and discover interesting details such as winning promo codes that were hidden in the background. 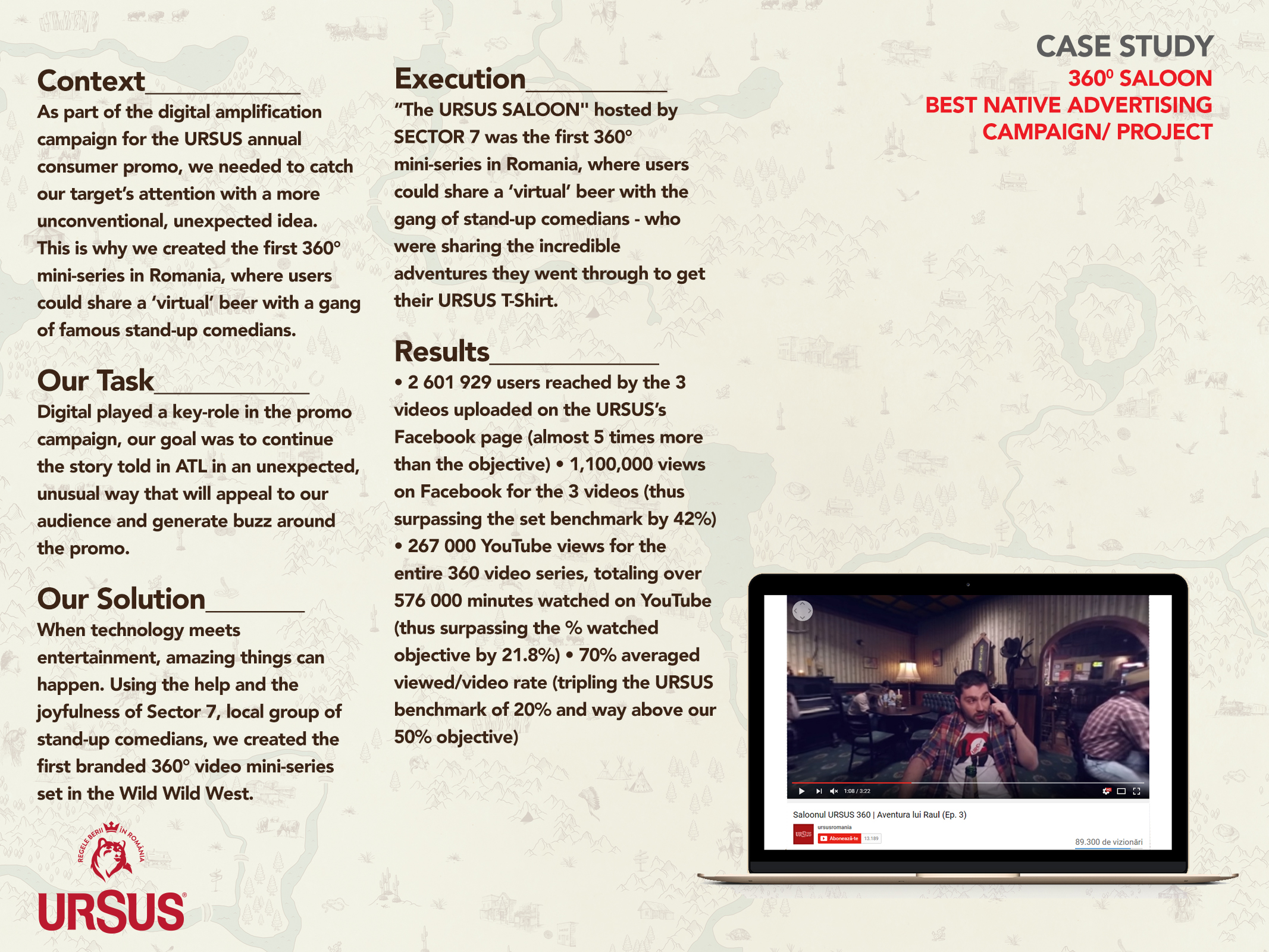 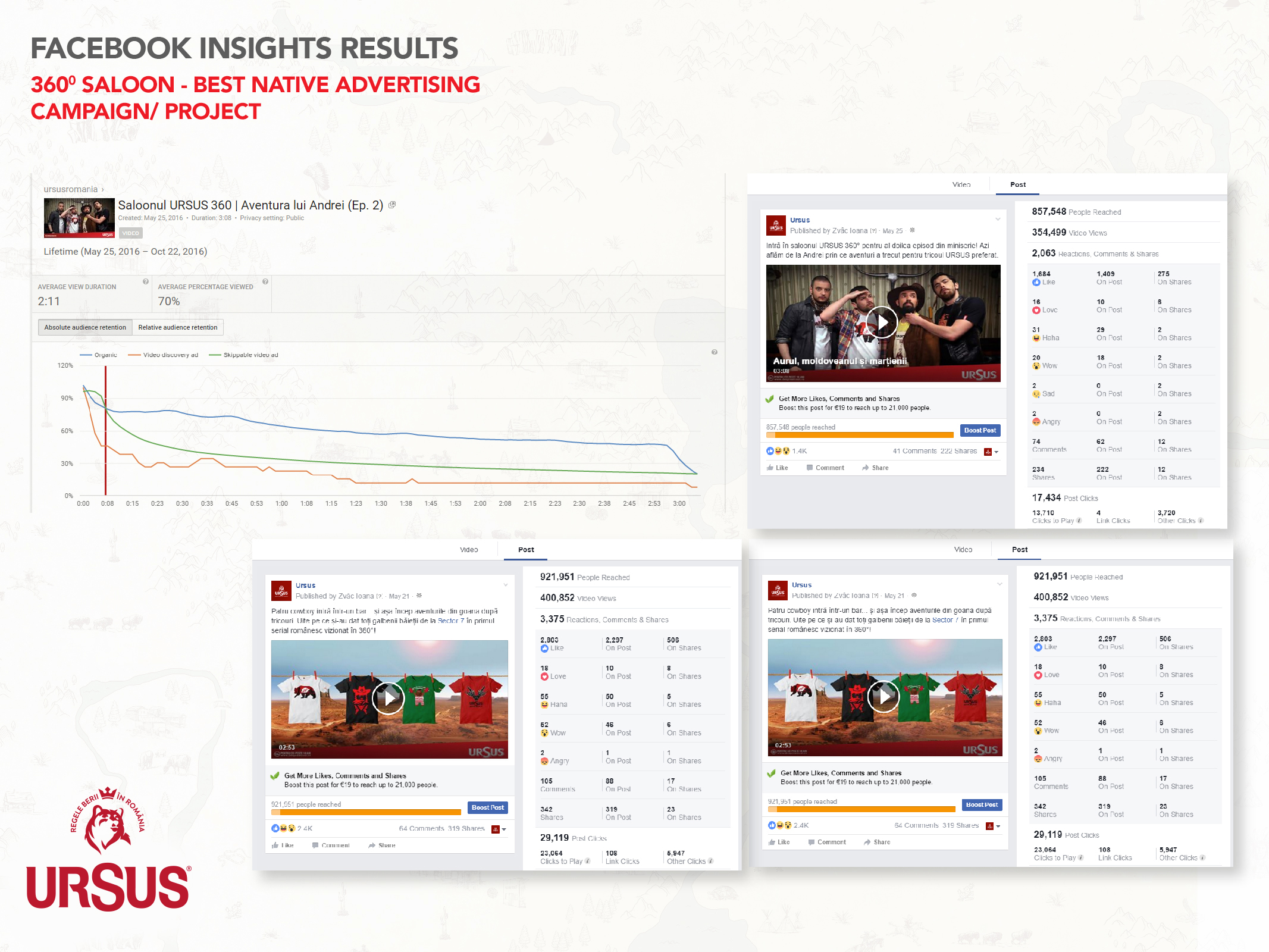